The Snow That Never Drifts 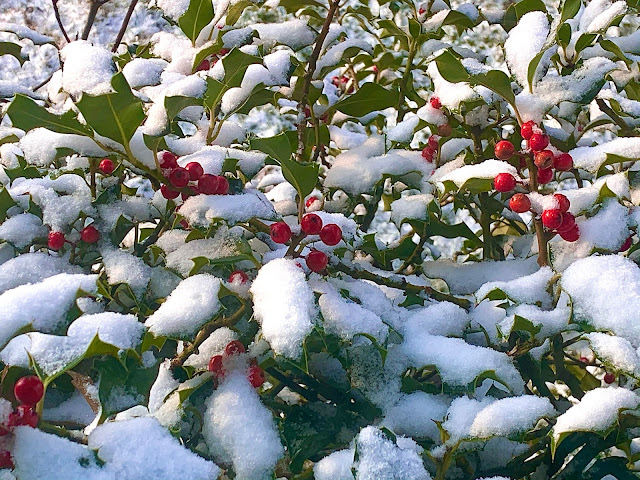 The winter solstice is near but cold weather and snow have already fallen in many places, including on the holly outside my window.
This a poem that seems to be about snow by Emily Dickinson.
The Snow that never drifts —
The transient, fragrant snow
That comes a single time a Year
Is softly driving now —
So thorough in the Tree
At night beneath the star
That it was February’s Foot
Experience would swear —
Like Winter as a Face
We stern and former knew
Repaired of all but Loneliness
By Nature’s Alibi —
Were every storm so spice
The Value could not be —
We buy with contrast — Pang is good
As near as memory —
When I was presented with this poem in a college class, it was given as an example of the puzzling nature of many of Emily’s poems. The professor asked us: What kind of snow never drifts? Is snow ever fragrant? Is this poem really about snow?
My first answer would be that she was thinking of a “snowfall” of white petals from a tree in spring. It’s a common image in haiku.
But what about her reference to February and winter? (And “February’s Foot,” I thought – what’s that all about?) Does she really mean this snow is only figurative?
Maybe a tree bloomed in February (In Amherst, Massachusetts? Hmmm…) but got hit with a winter blast and lost all its blossoms. If every storm was as “spice” (scented), “the Value could not be” – What could it not be?
“We buy with contrast — Pang is good / As near as memory —”  Do we
Oh, Emily. If only we could chat over some cake and tea. We have so many questions.
What is your interpretation of this poem?
Post a comment answer below.
Visit our website at poetsonline.org