Prompt: What You Missed In School 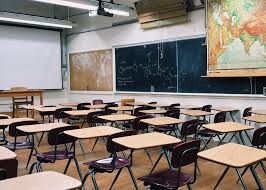 All of us missed some things when we were in school. Maybe you are still in school. From kindergarten through graduate school, we all have been absent in body and mind sometimes, and other times you were there in body but not in mind.

When I searched on “what you missed in school,” I got more than 40,000 hits, so we must have missed a lot of stuff.

There are two poems I like that deal with this topic. One is “What You Missed That Day You Were Absent from Fourth Grade” by Brad Aaron Modlin (from Everyone at This Party Has Two Names).

Mrs. Nelson explained how to stand still and listen
to the wind, how to find meaning in pumping gas,
how peeling potatoes can be a form of prayer. She took
questions on how not to feel lost in the dark…

And just before the afternoon bell, she made the math equation
look easy. The one that proves that hundreds of questions,
and feeling cold, and all those nights spent looking
for whatever it was you lost, and one person
add up to something.​

Modlin touches on a number of things that may not be listed in any curriculum, but are the kinds of things I found myself dealing with in my teaching days. Of course, teaching fourth grade or kindergarten is very different from teaching high school or college. And yet, school is a place where we learn many things not in the books or lesson plans.

The Modlin poem is a good companion to another popular-with-teachers poem “Did I Miss Anything?” by Tom Wayman which I discovered when I was teaching middle school. (It is in his Selected Poems and also appears in the anthology edited by Billy Collins when he was our Poet Laureate for teachers to use, Poetry 180)

I used Wayman’s poem several times for back-to-school nights with parents. There were some puzzled looks from the parents of kids who also frequently had puzzled looks in class. But most kids and parents get the point.

Wayman’s poem is a series of answers to the title question that alternate between “nothing” and “everything.” He starts by answering:

Nothing. When we realized you weren’t here
we sat with our hands folded on our desks
in silence, for the full two hours

and he concludes with a big Everything:

Everything. Contained in this classroom
is a microcosm of human experience
assembled for you to query and examine and ponder
This is not the only place such an opportunity has been
gathered
but it was one place
And you weren’t here

For our prompt this month, the topic is what you missed in school.  Was it something important? Was it all irrelevant? Do you even know what it is that you missed? Did you know it at the time, or have you realized it many years later?

Published in prompts and school