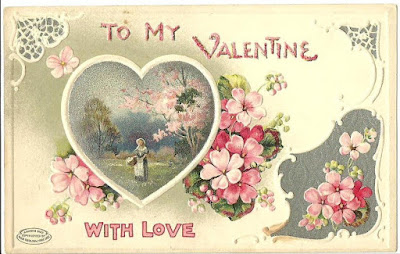 I was watching the video of Naomi Shihab Nye reading “Valentine for Ernest Mann,” which was made as part of the Academy of American Poets’ educational project for National Poetry Month in 2014.

There will be many cards given on February 14 with good and bad verses about love. But not all Valentine’s Day verses have to be about love or be happy – though that is usually the hope.

Did you give and get valentines as a child in school? When my sons were in elementary school, we were told that you had to have one for everyone in the class. This seemed to defeat the purpose, but it was politically correct and we looked for packages of cards that contained ones that were innocuous enough to give to both his female and his male classmates without causing a scene.

Reading Valentine for Ernest Mann by Naomi Shihab Nye, we find her response to a request for a poem from a boy. (I imagine it to be a student in a class she has visited.) That’s not the way it works with poems, she might have said. But she does write him a poem, even though:

You can’t order a poem like you order a taco.
Walk up to the counter, say, “I’ll take two”
and expect it to be handed back to you
on a shiny plate.

Still, I like your spirit.
Anyone who says, “Here’s my address,
write me a poem,” deserves something in reply.

She has suggestions on where you might find a poem: “They are the shadows / drifting across our ceilings the moment / before we wake up.” And advice: “What we have to do / is live in a way that lets us find them.”

Her valentine to Ernest is a poem, but it is also ways to find his own poems.

Maybe if we re-invent whatever our lives give us
we find poems. Check your garage, the odd sock
in your drawer, the person you almost like, but not quite.
And let me know.

Our writing prompt for February is a valentine, but that certainly doesn’t mean it must be a love poem. It might be difficult to find a serious or sad Valentine’s Day card in a store, but I’m sure they have been written.

A poet connection to all of this goes back to medieval English poet Geoffrey Chaucer. There are no records before his writing of romantic celebrations on Valentine’s Day. But when he wrote around 1375 his “Parliament of Foules,” he connected a tradition of courtly love with the celebration of St. Valentine’s feast day. That connection didn’t exist until he made it. In his poem February 14 is the day when birds and humans try to find a mate.

“For this was sent on Seynt Valentyne’s day
Whan every foul cometh ther to choose his mate.”

Chaucer may have invented the holiday.

The original valentine predates Chaucer. That valentine may have expressed love, but was certainly written under sad conditions. According to one version, an imprisoned Valentine (not yet Saint Valentine) sent a note of love to a young girl (possibly his jailor’s daughter–who visited him during his confinement) before his execution. He signed it “From your Valentine.” That expression is still in use today.


Submission Deadline for this prompt is February 28. Yipes! Short month!