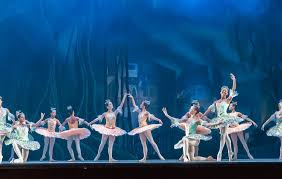 I am, like Emily Dickinson, not a dancer. We certainly are not like the trained ballet dancers in the Impressionist paintings of Degas or Matisse’s dancers.

I cannot dance upon my Toes—
No Man instructed me—
But oftentimes, among my mind,
A Glee possesseth me,

That had I Ballet knowledge—
Would put itself abroad
In Pirouette to blanch a Troupe—
Or lay a Prima, mad…

Perhaps, Emily and I are more like the dancer in “Danse Russe” by William Carlos Williams. who waits until his household is asleep

and the sun is a flame-white disc
in silken mists
above shining trees,-
if I in my north room
dance naked, grotesquely
before my mirror
waving my shirt round my head
and singing softly to myself

I can’t quite imagine Emily dancing naked around her room, though I hope she did sometimes, but even non-dancers sometimes get lost in “the dance.”

Was Williams thinking about the Ballets Russes, an avante-garde dance company of the time and its principal dancer, Vaslav Nijinsky? Nijinsky did not follow traditional ballet technique and often danced half-naked. In his Faun costume for the dance he created to Debussy’s Prélude à l’après-midi d’un faune he was known to make gestures of orgasm to a scarf and it was a scandal on several continents.

The poem is, for me, a simple dance of freedom and joy that one can have in the privacy of one’s own place. (That doesn’t mean the poem hasn’t been interpreted quite differently by others – check out this post.)

But “the dance” does not even have to be about dancing.

We use the verb dance to mean “to leap or skip in excitement or joy.” We sometimes describe animals or even objects as dancing, as with the mating dances of birds or a toy sailboats dancing on the water.

The noun “dance” is an important part of many rituals and ceremonies from proms to weddings.

The American NCAA Division I Men’s Basketball Tournament is called “The Big Dance.”

The Dance of the Planets is a phrase used sometimes in this late spring season when Jupiter, Venus, and Mercury all appear to be right next to each other in the evening sky. Over a period of time, they seem to rotate and change positions, like dancers, with each other.

In “The Dance by Wendell Berry, I think the poet combines the literal and figurative dances.

He begins with the literal:

I would have each couple turn,
join and unjoin, be lost
in the greater turning
of other couples, woven
in the circle of a dance,
the song of long time flowing

but then turns figuratively to asking

What is fidelity? To what
does it hold? The point
of departure, or the turning road
that is departure and absence
and the way home? What we are
and what we were once

Our writing prompt this month is simply “the dance” in any of its literal or figurative or verb or noun forms.

New to our site? Check our submission guidelines.