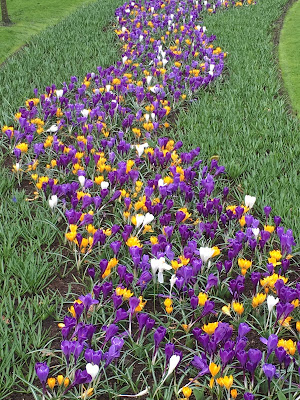 The reverdie is an old French poetic genre. It originated with troubadour ballads of the early Middle Ages and so many of them were song lyrics. They are usually about the arrival of spring. The word “reverdie” translates as “re-greening.” There are some traditions in those old poems and lyrics, such as addressing spring as a beautiful woman. Reverdies were often dancing songs and were popular during the time of Chaucer.

The Middle English reverdie that begins “Svmer is icumen in/ Lhude sing cuccu” can be translated as “Summer has arrived / Sing loudly, cuckoo! /The seed is growing / And the meadow is blooming /And the wood is coming into leaf now / Sing, cuckoo!” This “Cuckoo Song” is one I always find odd because it says that summer is coming and yet all the images seem to be of spring.

There are many, perhaps too many, poems about spring. In lists of them, you will find Eliot’s “The Waste Land.” I like Eliot’s poetry, but his images of spring are pretty grim. The poem’s first section is subtitled “The Burial of the Dead” and its opening is often quoted:

Spring and All is a volume of poems by William Carlos Williams and the section we consider for this prompt is “By the road to the contagious hospital” – which also sounds pretty grim.

By the road to the contagious hospital
under the surge of the blue
mottled clouds driven from the
northeast-a cold wind. Beyond, the
waste of broad, muddy fields
brown with dried weeds, standing and fallen

patches of standing water
the scattering of tall trees

The landscape is “Lifeless in appearance” but Williams knows that “sluggish dazed spring approaches” and the poem is more optimistic in this very early spring.

They enter the new world naked,
cold, uncertain of all
save that they enter. All about them the cold, familiar wind- Now the grass, tomorrow
the stiff curl of wild carrot leaf
One by one objects are defined-
It quickens: clarity, outline of leaf…
Still, the profound change
has come upon them: rooted, they
grip down and begin to awaken

E. E. Cummings describes Spring as being “like a perhaps hand
(which comes carefully
out of Nowhere)arranging
a window,into which people look(while
people stare
arranging and changing placing
carefully there a strange
thing and a known thing here)and
changing everything carefully

What we asked poets to do this month was to write a reverdie about the arrival of spring but – is this is not easy – say something that has not been said by poets before.

In “Spring Snow” by Arthur Sze, I see a picture of the spring around me currently – a mix of winter and summer that has not been well blended.

A spring snow coincides with plum blossoms.
In a month, you will forget, then remember

what I like about the poem is the unexpected images that follow in his reverdie. Snow and plum blossoms seem like a wrong coincidence, but it occurs in haiku fairly often, But he follows with several images of that odd mix.

when nine ravens perched in the elm sway in wind.

I will remember when I brake to a stop,
and a hubcap rolls through the intersection

In “National Poetry Month” the poem speaks by itself, according to Elaine Equi. The poem mentions April, but can you find the spring within it?

Sometimes the poem weaves
like a basket around
two loaves of yellow bread.

“Break off a piece
of this April with its
raisin nipples,” it says.

“And chew them slowly
under your pillow.
You belong in bed with me.”