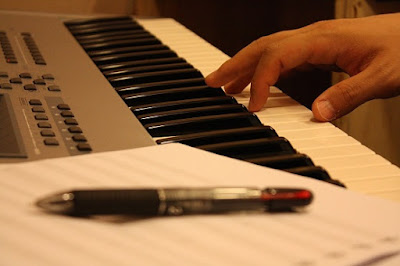 Having gone through high school in the late 1960s, several of the younger English teachers brought popular song lyrics into our poetry lessons to entice us beyond Keats, Frost and the rest of the anthology club.

One of my teachers was a big Simon and Garfunkel fan, as was I. I still recall a lesson reading  “Richard Cory” by E.A. Robinson and then listening to their song version.  My first thought in seeing the original poem was that Simon had basically plagiarized the poem. But Mr. Reece, my teacher, talked about how Paul had changed the point of view to one of Cory’s workers, and how that changed the poem for a reader.

In the following weeks, I wrote several terrible songs with my guitar based on poems that I liked. (Never ask me to sing my Frostian “Miles to Go” song.)

The other poem/song combination in that class session was Simon’s “I Am a Rock” along with Donne’s poem “No Man Is an Island.” Here the differences were more obvious. It was more that the Donne poem, and really just one image, acted as a writing prompt for Paul Simon.

Our teachers probably hoped that beyond sparking our interest in poetry, we might make the leap to read more of Robinson or Donne beyond what was in the anthology. I did, though most of my classmates did not.

I liked Robinson’s poems, many of which were like short stories.

Songs based on poems are fairly common. There are a good number of direct interpretations as when Natalie Merchant uses poems, such as Emily Dickinson’s “Because I Could Not Stop for Death.”

This month we are going to try writing a poem from an existing song. But we are not looking to imitate the song or even use lines from the song. A better model, though in the reverse direction, might be Paul Simon’s “I Am a Rock” which takes inspiration, but does not merely imitate John Donne’s poem.

I AM A ROCK

A winter’s day
In a deep and dark December
I am alone
Gazing from my window
To the streets below
On a freshly fallen, silent shroud of snow

I am a rock
I am an island

I’ve built walls
A fortress, steep and mighty
That none may penetrate
I have no need of friendship
Friendship causes pain
It’s laughter and it’s loving I disdain

Don’t talk of love
Well, I’ve heard the words before
It’s sleeping in my memory
And I won’t disturb the slumber
Of feelings that have died
If I never loved, I never would have cried

I am a rock
I am an island

And a rock feels no pain
And an island never cries

NO MAN IS AN ISLAND

No man is an island entire of itself; every man
is a piece of the continent, a part of the main;
if a clod be washed away by the sea, Europe
is the less, as well as if a promontory were, as
well as any manner of thy friends or of thine
own were; any man’s death diminishes me,
because I am involved in mankind.
And therefore never send to know for whom
the bell tolls; it tolls for thee.

For this prompt, select any song as your inspiration. Indicate at the top or bottom of your poem what song/composer/artist you used. You might select some lines to repurpose. You might use themes from the song in your own poem. The original should serve as a contrasting view or extension to your poem, rather than being just another version of it.