Prompt: Once Upon a Time 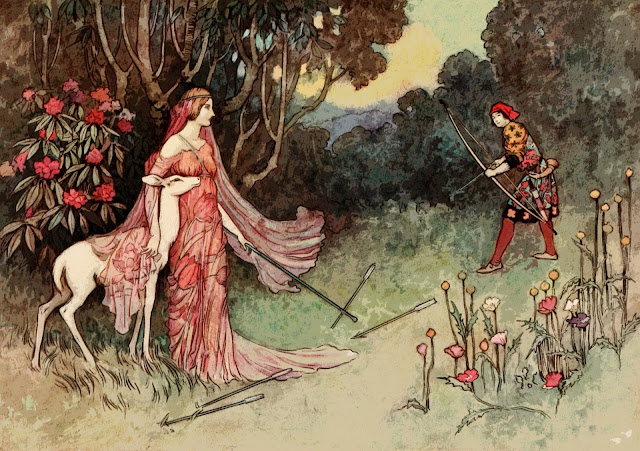 I wasn’t a big fan of fairy tales as a child and I didn’t read many of them to my own children. They can be pretty cruel and violent.
When I was a college student, a book by Bruno Bettelheim, a 20th-century child psychologist, was very popular in literature and education classes. That book is The Uses of Enchantment: The Meaning and Importance of Fairy Tales, a study of fairy tales and their universal importance in understanding childhood development. His examples include stories like “The Three Little Pigs,” “Hansel and Gretel,” and “The Sleeping Beauty.” Bettelheim admits that the tales are often cruel but that they do help teach lessons about finding meaning for one’s life.
Our prompt for June is a poem that tries one of these four paths through fairy tales:
based on a fairy tale, based on characters appearing in those tales, a new fairy tale, or a poem using the conventions of fairy tales.
Here are some samples to consider.
“Girl Without Hands” by Margaret Atwood is directly inspired by a Brothers Grimm’s fairy tale.
…Only a girl like this
can know what’s happened to you.
If she were here she would
reach out her arms towards
you now, and touch you
with her absent hands
and you would feel nothing, but you would be
touched all the same.
“Mermaid Song” by Kim Addonizio finds a fairy tale character lying on her sofa.
Damp-haired from the bath, you drape yourself
upside down across the sofa, reading,
one hand idly sunk into a bowl
of crackers, goldfish with smiles stamped on…
Alicia Ostriker’s poem “Utopian” is about a new fairy tale world created by a child that the poet then needs to interpret.
My neighbor’s daughter has created a city
you cannot see
on an island to which you cannot swim
ruled by a noble princess and her athletic consort
all the buildings are glass so that lies are impossible
beneath the city they have buried certain words
which can never be spoken again
chiefly the word divorce which is eaten by maggots…
“From the Country Notebooks” by Geffrey Davis uses some fairy tale conventions – including “once upon a time” and some of that violence, but the tale is very real.
Once upon a time, my father was offered a shovel
and ten minutes alone with the prized stallion—Just don’t
kill him.    Once upon a time, I asked about the apple-
knotted scar on my father’s back shoulder, as he dressed
for work: That’s from when Sammy tried to kill me.
Remember?    Once upon a time, my father accepted a shovel
and the problem of answering violence without loosing
too much blood from Sammy’s chestnut body, nervous
in the stable.    Once upon a time…
Though we think of fairy tales are meant for children as a way to help them solve problems such as separation anxiety, oedipal conflict, and sibling rivalries, your poem will probably be meant for adults.
DEADLINE FOR SUBMISSIONS: July 8, 2020
Visit our website at poetsonline.org

Published in fairy tales and prompts