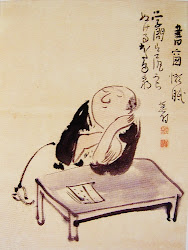 I have been a longtime admirer of the haiga which combines haiku poems, calligraphy and painting. Haiga (俳画, haikai drawing) is a style of Japanese painting that incorporates the aesthetics of haikai.

They were typically painted by haiku poets (haijin), and are often accompanied by a haiku poem.

The paintings, like the poetic form it accompanied, were simple observations of the everyday world.

Poets have frequently been inspired by art – paintings, sculpture and other forms. The name of this kind of poetry is ekphrasis.

Ekphrasis means “description” in Greek and older ekphrastic poems tend to focus on sometimes elaborate descriptions of the art. An example of this is Keat’s “Ode on a Grecian Urn.” John Keats does go beyond description in his speculation on the identity of the lovers who appear to dance and play music on that urn.

For our April writing prompt, we set two restrictions on your poem. First, we are interested in poems that go beyond description. Be a poet who interprets, inhabits, confronts, speaks to and reflects on the “action” of a painting and amplifies or expands its meaning.

Our second parameter is that you use a painting or drawing by American artist Edward Hopper. He is one of the most popular of modern American artists and some of his paintings have been widely used, reproduced, even parodied.

Hopper art is easy to find online. I suggest taking a look at wikiart.org’s collection of almost 200 of his works. You’ll see his very famous Sunday Morning and Nighthawks but I suggest you might choose one of his lesser known paintings or drawings.

His painting Gas suggests so many stories: Where is that Mobil station? How different was a gas station in that time? Who is that man – owner, worker? What mood does the poem suggest? Who just left the station after filling up?

You might also look at his paintings grouped together by themes or motifs that inhabit his work, such as couples or windows.

You will not be the first poets to use Hopper. There are two poems I will post on our website for this prompt. 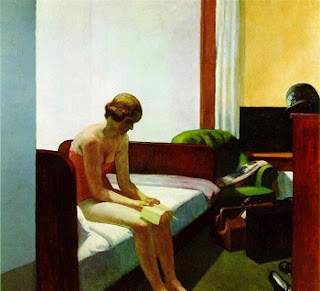 While the man is away
telling his wife
about the red-corseted woman,
the woman waits
on the queen-sized bed…

…That is all
the artist left us with,
knowing we would turn
the woman’s stone into ours,
a thirst for the self
in everything—even
in the sweet chinks
of mandarin.

The second model poem is “Edward Hopper and the House by the Railroad (1925)” by Edward Hirsch. Here is an excerpt: 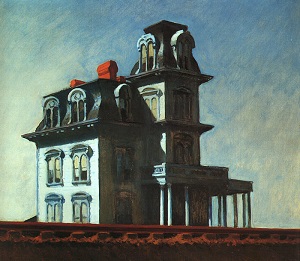 Out here in the exact middle of the day,
This strange, gawky house has the expression
Of someone being stared at, someone holding
His breath underwater, hushed and expectant…

Now the stranger returns to this place daily
Until the house begins to suspect
That the man, too, is desolate, desolate
And even ashamed. Soon the house starts

To stare frankly at the man…

​Some additional sources you may want to consult about poets reacting to art.
Museum of Words: The Poetics of Ekphrasis from Homer to Ashbery
english.emory.edu/classes/paintings&poems
rattle.com/poetry/extras/ekphrasis/