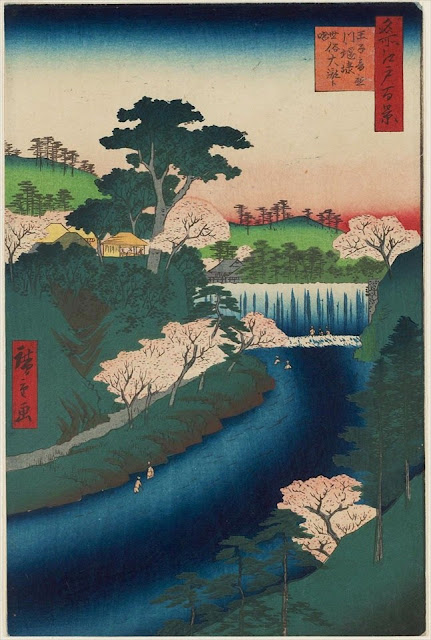 These past few weeks I have had a hard time focusing on any sustained reading, so I Have returned to an anthology of haiku. Most people are familiar with the form and the 5-7-5 syllable structure. Those three lines of 5 syllables, 7 syllables, and another 5 syllable line are not always maintained.
In Japanese, haiku does use those 17 syllables but instead counts sound. We would count the word “haiku” as two syllables in English, but it is three sounds in Japanese (ha-i-ku).
This month we are using the haiku form with a strict 5-7-5 syllables. We will also follow several other form “rules.” Classic haiku is nature-based and often seasonal. No rhymes. Classical haiku also employs a cutting word (kireji in Japanese) that makes a verbal punctuation mark that separates the typically two juxtaposed images of the poem. In English, we don’t have kireji so poets sometimes use a dash to make a pause so that readers can reflect on the connection between the two parts. That a good idea because a haiku can be read and digested too quickly.
Translations of Japanese haiku into English vary greatly. There is a poem by the master Matsuo Basho’s (1644-1694) that reads in Japanese as:
Furuike ya
kawazu tobikomu
mizu no oto
I found many translations of this famous frog poem. The most literal one I found is not 5-7-5.
old pond
frog leaps —
sound of the water
Here are two other translations:
mossy pond;
frog leaping in—
splash!
when the old pond
gets a new frog
it’s a new pond
This is a version described as “translated as a Zen koan”
the bungling frog
leaped for the pond, but landed
in Basho’s brain

Our haiku prompt this month is to write a sequence of 3 or more related poems. I have seen several variations on this kind of sequence. It can be 3 poems on the same thing. I have seen poems connected by using the last word of one as the first word of the next (still possibly connected by theme) and several poems constructed using the same words in new constructions.
As a model, I chose three spring poems by Basho that are connected by the season but also by blossoms which are very often used in haiku to indicate spring. These are my own translation and I have adhered to the 5-7-5 form. (Note: “ume” means plum)
today they begin
selling sake and ume  –
I smell the blossoms
all four of my bowls
for noon meal are not perfect –
cherry blossom rain
the ume blossom
perfume is taken by wind
into the cold winter
Submission Deadline: May 31, 2020
Visit our website at poetsonline.org

Published in Basho, haiku and prompts