Prompt: Get the News from Poems 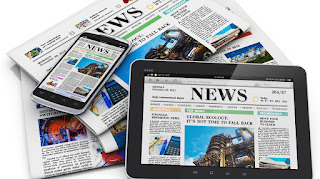 Late in his career, William Carlos Williams wrote a long poem titled “Asphodel, That Greeny Flower.” Toward the end of the poem, he wrote: “It is difficult / to get the news from poems / yet men die miserably every day / for lack / of what is found there.”

Is news what is found in poems? Or is what we get from poems not news but what we need to live?

In B.J. Ward‘s poem, a man decides to get his news not from the newspaper but from Shakespeare’s Othello.

A man awakes every morning
and instead of reading the newspaper
reads Act V of Othello.
He sips his coffee and is content
that this is the news he needs
as his wife looks on helplessly.
The first week she thought it a phase,
his reading this and glaring at her throughout,
the first month an obsession,
the first year a quirkiness in his character,
and now it’s just normal behavior,
this mood setting in over the sliced bananas,
so she tries to make herself beautiful
to appease his drastic taste.
And every morning, as he shaves
the stubble from his face, he questions everything—
his employees, his best friend’s loyalty,
the women in his wife’s canasta club,
and most especially the wife herself
as she puts on lipstick in the mirror next to him
just before he leaves. This is how he begins
each day of his life—as he tightens the tie
around his neck, he remembers the ending,
goes over it word by word in his head,
the complex drama of his every morning
always unfolded on the kitchen table,
a secret Iago come to light with every sunrise
breaking through his window, the syllables
of betrayal and suicide always echoing
as he waits for his car pool, just under his lips
even as he pecks his wife goodbye.

In the play, Othello confronts Desdemona about committing adultery and then strangles her in their bed. But Emilia realizes what her husband Iago has done and she exposes him. He kills her. Othello now realizes, too late, that Desdemona is innocent. He stabs Iago but doesn’t kill him, saying he would rather have Iago live the rest of his life in pain. Then Iago and Othello are arrested for the murders of Roderigo, Emilia, and Desdemona. Othello commits suicide.

Othello is not a comedy.

If the “daily grind” is the difficult, routine and monotonous tasks of daily work – the newspaper, coffee, breakfast, shaving, the tie – then reading Othello breaks that routine. But “the complex drama of his every morning” was always there, “always unfolded on the kitchen table.” And now, “a secret Iago come to light with every sunrise.”

What news did the husband find in this play-in-verse?  Is it the syllables of “betrayal and suicide always echoing” and he waits for his ride to work? Is that what is “just under his lips / even as he pecks his wife goodbye?”

This is not a comedy either.

But returning to that poem by William Carlos Williams, “Asphodel, That Greeny Flower,” here the poet finds the news in the form of a love poem written to his wife. But this long love poem also has its dark moments.

Allen Ginsberg, a great admirer of William Carlos Williams, titled one of his books Planet News. That book contains a poem about getting the news of Williams’ death. The poem is called “Death News” and it is about his first reactions upon hearing of the death of his elder.

So much news by poets.

This month we are writing poems about the news. It is a deceptively challenging prompt. It might mean writing about the news as it is found in poetry, or the poetry found in the news.  As Williams might have said, this is the information that doesn’t become dated or irrelevant with the passage of time.