There has always been some counting in poetry – the 14 of the sonnet, the 5-7-5 of the haiku, the counting beats of iambic pentameter or any meter form or not.

In the past, we asked poets to try their hand at poems about mathematics.

I prove a theorem and the house expands:
the windows jerk free to hover near the ceiling,
the ceiling floats away with a sigh.

And we have written poems about all forms of numbers, as in ” A Word on Statistics” by Wislawa Szymborska which begins:

Out of every hundred people,

those who always know better:
fifty-two.

Unsure of every step:
almost all the rest.

Ready to help,
if it doesn’t take long:
forty-nine.

But this month we are getting more specific in our connecting of math and poetry with a poetry form called the “Fib.”

The “traditional” Fibonacci poem is a 6-line poem using the Fibonacci Sequence, but poets have also used more than 6 lines, but what remains constant is the number sequence. But we need to be cognizant of the math. If you try a Fib sonnet, line 14 will need 377 syllables!

Kiss
me
again
tongue and lips
like Fibonacci’s
sequence, each movement a spiral,
enfold, unfold, a working through and against, again.

— by Athena Kildegaard, from Rare Momentum

Fibonacci numbers are named for Leonardo Fibonacci, who in 1202 used them to describe the growth of a rabbit population. He wasn’t the first as it was known in antiquity in Greece and India. It was also noted that the Fibonacci sequence also describes numerous growth process patterns of plants. My favorite example from nature is the spirals of the sunflower. 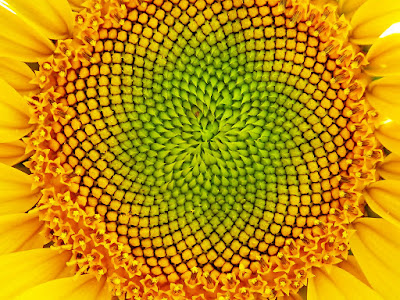 A bit more math that might possibly inspire your poem. The Fibonacci series is directly related to the Golden Ratio. As you progress in the sequence, the closer the quotient of successive numbers approaches the golden ratio (1.618033…)

Other than the lines and syllables, the subject of your Fibonacci poem has no restriction, but we gently suggest that you get beyond math and the form itself.

You may also want to submit a Fib poem to The Fib Review.