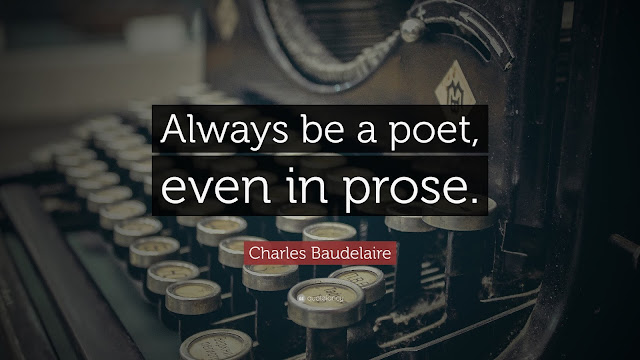 “Which one of us, in his moments of ambition, has not dreamed of a miracle of poetic prose, musical without rhythm and without rhyme, supple enough and rugged enough to adapt itself to the lyrical impulses of the soul, the undulations of reverie, the jibes of conscience?” – Charles Baudelaire

Since Charles Baudelaire and others suggested this new poetry form – a genre with an oxymoron for a name” – it has intrigued and baffled readers and writers.

A prose poem is a composition that, while not broken into verse lines, demonstrates other traits such as symbols, metaphors, and other figures of speech common to poetry. It is not just a poem without line breaks or poetic prose.

There are passages in early Bible translations and the Lyrical Ballads of William Wordsworth that can be considered prose poems, but the form was formalized by the nineteenth-century French symbolist writers such as Aloysius Bertrand and Charles Baudelaire.

Here is Baudelaire’s “Be Drunk”:

You have to be always drunk. That’s all there is to it—it’s the only way. So as not to feel the horrible burden of time that breaks your back and bends you to the earth, you have to be continually drunk.

But on what? Wine, poetry or virtue, as you wish. But be drunk.

I saw a notice last month of the passing of Louis Jenkins, a prose poet who I have workshopped with and whose work I have enjoyed. Here’s a sample of Jenkins’ prose poetry – “Too Much Snow” from his collection Just Above Water.

Unlike the Eskimos we only have one word for snow but we have a lot of modifiers for that word. There is too much snow, which, unlike rain, does not immediately run off. It falls and stays for months. Someone wished for this snow. Someone got a deal, five cents on the dollar, and spent the entire family fortune. It’s the simple solution, it covers everything. We are never satisfied with the arrangement of the snow so we spend hours moving the snow from one place to another. Too much snow. I box it up and send it to family and friends. I send a big box to my cousin in California. I send a small box to my mother. She writes “Don’t send so much. I’m all alone now. I’ll never be able to use so much.” To you I send a single snowflake, beautiful, complex and delicate; different from all the others.

This month’s prompt is inspired by a new collection of prose poems from Renée Ashley titled Ruined Traveler. Renée writes poetry, such as in her collection The View from the Body, but also prose (Minglements: Prose on Poetry and Life) and even a novel, Someplace Like This, so Renée has four feet in all those modes!

Her collection of prose poems, Ruined Traveler, contains compressed poems. Most have rigid justified margins to heighten pressure on the language. A few short poems shoot out from the right margin. Titles often start the poems [bracketed]. There are also long segmented poems (such as “Ruined Traveler” and “from Her Book of Difficulties”) that are interwoven throughout the collection.

Looking at two model poems from her collection, you can see that rather than punctuation, capital letters indicate “lines” (though without line breaks). That’s certainly not a prose rule, but it is another possibility.

from Her Book of Difficulties

Everything Was News to Me

The night wasn’t starless but it was white sky It was snowing Had been snowing for days The snow was up to the sky The waves were scouring white when the search-lights found them The birds wore white we could not see them We could not see the sand She said again she could not begin without a story She said could not begin The wind drew nearer hard like a rock thrown She was looking for a word to help her understand Occlusion Impediment Projectile She tried salt and chalk Tried pearl  She didn’t want a metaphor She had the common white belly of the moon Of wishbone Of thigh Of breast and nape Of nape The word came to her then: lumen She said it aloud: lumen You could build cities in that man’s heart she said Said together we could watch them fall

In Ashley’s two poems, you won’t find the straight story narrative of the Baudelaire or Jenkins poems. Both of her poems are much closer to poetry than many prose poems. But that range of styles over several centuries shows you the possibilities.

For this month’s prompt, we are asking you to write a factoid prose poem. That is one that begins with or uses at least one piece of factual information. The best of these poems mix information and imagery and create (as Mallarme said) “the intersections, the crossing of the unexpected with the known.” This prompt was suggested by Danielle Mitchell and here are two of her own poems and another factoid example by David Ignatow, “Information.”

This is our fourth prose poem prompt so take a look in our archive on the main site for other examples.