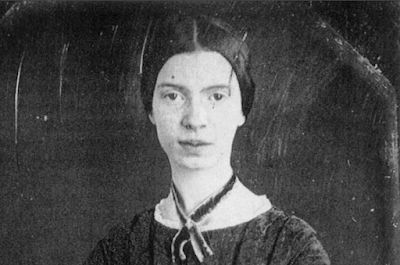 If you’re looking for who Emily Dickinson really “is” I think you will find it in the letters – when you read them along with the poems.

I remember reading Emily’s poems in high school. My impression of her (bolstered by that one sad photo) was of a hermit, virgin who had a sad life spent mostly in her room, house and garden. Poor little Em.

I didn’t really like Emily’s poems back then. I like them a lot more now, but that came through learning more about her. I know I’m not supposed to enjoy poems more because I like the poet, but that’s what has happened. I seem to write a lot here about Emily and her writing.

There is more joy and life in her letters. She’s not the lonely spinster in many of those letters. There is life, love and passion.

There are a number of collections of her letters including multi-volume sets like one facsimile set published by Forgotten Books and also shorter edited (and sometimes censored) selected letters.

The letters that interest me most – and are getting more attention lately – are ones to Susan. Those letters record a thirty-six year correspondence with her childhood friend and neighbor, Susan Gilbert, who would later be her sister-in-law, Susan Dickinson.

There is a good introduction to the Susan and Emily relationship in a post on BrainPickings. I read through the single volume collection of these letters titled Open Me Carefully. These are not censored and so offer a different Emily Dickinson and her letters (also some poems) to Sue, Susan, Susie.

Show me Eternity, and I will show you Memory —Both in one package lainAnd lifted back again —Be Sue — while I am Emily —Be next — what you have ever been — Infinity.

Open Me Carefully: Emily Dickinson’s Intimate Letters to Susan Huntington Dickinson  is a new book that shines a new light to Emily. Not a lonely spinster in her letters which are presented here without much commentary. They speak for themselves.

“… unlike previous editors who altered line breaks to fit their sense of what is poetry or prose, Hart and Smith offer faithful reproductions of the letters’ genre-defying form as the words unravel spectacularly down the original page.” – Renee Tursi, The New York Times Book Review 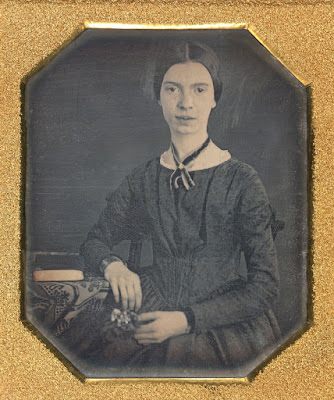 There have been several modern screen versions of a more passionate Emily Dickinson. The latest one is an original on the new Apple+ channel called Dickinson. It is a historical period comedy-drama series that stars Hailee Steinfeld as Emily. It explores Emily’s love for Susan Gilbert. The first season was released in November 2019 and a second season will follow.

In a letter to Susan:

I need you more and more, and the great world grows wider . . . every day you stay away — I miss my biggest heart; my own goes wandering round, and calls for Susie… Susie, forgive me Darling, for every word I say — my heart is full of you . . . yet when I seek to say to you something not for the world, words fail me… I shall grow more and more impatient until that dear day comes, for til now, I have only mourned for you; now I begin to hope for you.

Now, farewell, Susie . . . I add a kiss, shyly, lest there is somebody there! Don’t let them see, will you Susie?

And finally, in a mix of Emily’s poems and letters, there are her poems written on envelopes which were finally published as The Gorgeous Nothings. This is a full-color facsimile edition of the envelope poems. There are 52 envelope poems.

PHOTO USED ABOVE IN SECTIONS: Daguerreotype of Emily Dickinson taken at Mt. Holyoke in December 1847 or early 1848

Published in Emily Dickinson and letters