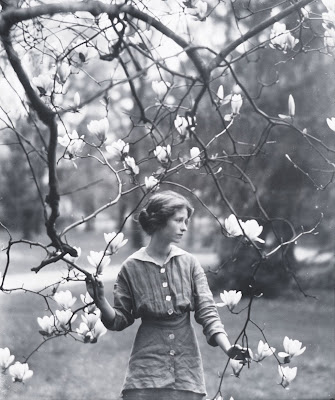 To a Young Poet
Time cannot break the bird’s wing from the bird.
Bird and wing together
Go down, one feather.
No thing that ever flew,
Not the lark, not you,
Can die as others do.

Edna St. Vincent Millay was flamboyant in her love affairs and her art.

She was the first woman ever to win the Pulitzer Prize.

She was said to be an exciting performer of her poetry. Her voice was likened to “an instrument of seduction” and her impact on audiences and men was legendary.

Millay married a self-proclaimed feminist, Eugen Boissevain, who gave up his own pursuits to manage Millay’s literary career. Millay wrote that as a couple acted liked two bachelors. They remained “sexually open” throughout their twenty-six-year marriage. Boissevain died in 1949 and Edna died in 1950.

I picked up the poetry collection, The Selected Poetry of Edna St. Vincent Millay, and then dipped into the Millay biography by Nancy Milford, (who also edited the poetry collection). Milford says in the biography that the story is “a family romance” because of the love between the three Millay sisters and their mother – a love so deep as to be dangerous.

Millay’s sonnets from her early twenties were the poems that made her reputation as being insolent, flip, and defiant in her first book of poetry, Renascence and Other Poems.

In the 1920s, she was voice of liberation. But reading a selection of her poems, you’ll find love, death, nature and allusions to the classical and the romantic.

A Visit to the Asylum

Once from a big, big building,
When I was small, small,
The queer folk in the windows
Would smile at me and call.
And in the hard wee gardens
Such pleasant men would hoe:
“Sir, may we touch the little girl’s hair!”—
It was so red, you know.
They cut me coloured asters
With shears so sharp and neat,
They brought me grapes and plums and pears
And pretty cakes to eat.
And out of all the windows,
No matter where we went,
The merriest eyes would follow me
And make me compliment.
There were a thousand windows,
All latticed up and down.
And up to all the windows,
When we went back to town,
The queer folk put their faces,
As gentle as could be;
“Come again, little girl!” they called, and I
Called back, “You come see me!”

“A Visit to the Asylum” by Edna St. Vincent Millay is in the public domain.

POEMS BY MILLAY
at poetryfoundation.org
at poets.org