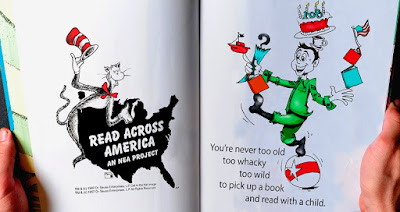 Theodor Geisel, better known as Dr. Seuss, is our featured poet for this month’s prompt. The author of more than 60 children’s books majored in English at Dartmouth and was the editor and a contributor to the campus humor magazine.

He was caught drinking gin on campus (this was Prohibition, so it was definitely illegal). He was forced to resign from all of his extracurricular activities, including the humor magazine. But he continued to write for the magazine but signed his work with his mother’s maiden name, Seuss.

He published his first children’s book in 1937. He said that the book, And to Think That I Saw It on Mulberry Street, was inspired by the rhythms of a steamliner cruiser he was on.

That book, and much of the rest of his life’s work, was written in rhyming anapestic meter, also called trisyllabic meter.

The meter is made up of two weak beats followed by a stressed syllable.

And today the Great Yertle, that Marvelous he
Is King of the Mud. That is all he can see.

He was a serious writer and spent a long time revising. In The Cat in the Hat, he wanted to limit the vocabulary for his young readers. The book has only 220 different words but is 1702 words long.

Like any poet, he struggled to get every line correct. He once said: “Writing for children is murder. A chapter has to be boiled down to a paragraph. Every word has to count.”