A Series of Fortunate Poetry Events 2 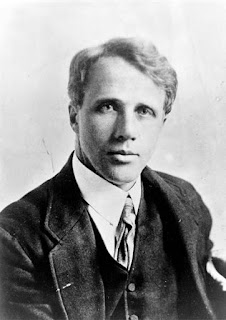 In my earlier post, I wrote about the actual Series of Unfortunate Events book and TV series and how poetry enters the story with some fortunate events. (part 1)

Another fortunate event this month was that on January first, a huge cache of too-long-copyrighted material entered the public domain.

One example is the best-known poem by Robert Frost, which might also be the best known American poem – “Stopping by Woods on a Snowy Evening.”

The 1923 poem would have entered the public domain in 1999 because most creative works were protected for 75 years.  But a number of efforts to extend copyright protections for many categories of intellectual property have been enacted that extended that law. Because of heavy lobbying led by the Walt Disney Co., Congress passed the 1998 Sonny Bono Copyright Term Extension Act, which retroactively extended copyright protection until Dec. 31, 2018.

I have written here about the inspiration for “Stopping by Woods on a Snowy Evening” and also about the oddity that Frost was writing this classic winter poem in summer.

Now I can reproduce the entirety of Frost’s poems from that period without permission or restriction. And you could print them in books, webpages, and on t-shirts, if you want.

Stopping by Woods on a Snowy Evening

Whose woods these are I think I know.
His house is in the village though;
He will not see me stopping here
To watch his woods fill up with snow.

My little horse must think it queer
To stop without a farmhouse near
Between the woods and frozen lake
The darkest evening of the year.

He gives his harness bells a shake
To ask if there is some mistake.
The only other sound’s the sweep
Of easy wind and downy flake.

Published in public domain, Robert Frost and Stopping by Woods on a Snowy Evening