A Fall of Leaves

That time of year thou mayst in me behold
When yellow leaves, or none, or few, do hang
Upon those boughs which shake against the cold,
Bare ruined choirs, where late the sweet birds sang…
~ William Shakespeare, Sonnet 73 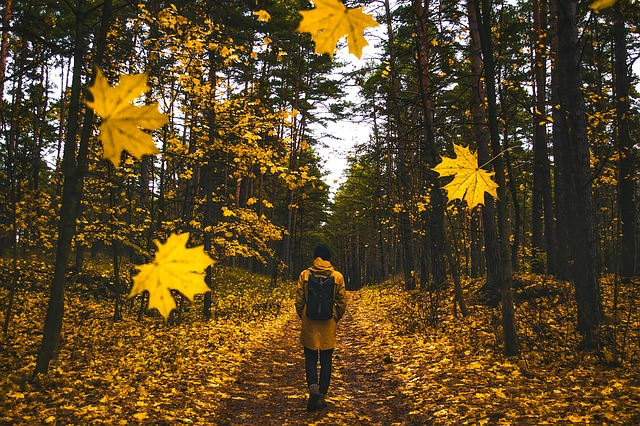 The words “autumn” and “fall” meaning the season that begins today in the Northern Hemisphere both originated in Britain, but one is more commonly used there while the other is more common in America. By the mid-1800s, “fall” was considered to be the  American season by lexicographers.

Autumn is the older word, coming into English in the 1300s from the Latin word autumnus.

At one time there was an intermediary season preceding our autumn that was called “harvest.” It seems that autumn came into usage to distinguish between the time when one harvests crops and the actual crop harvest itself.

“To Autumn” by John KeatsSeason of mists and mellow fruitfulness,
Close bosom-friend of the maturing sun;
Conspiring with him how to load and bless
With fruit the vines that round the thatch-eves run;
To bend with apples the moss’d cottage-trees,
And fill all fruit with ripeness to the core;
To swell the gourd, and plump the hazel shells
With a sweet kernel; to set budding more,
And still more, later flowers for the bees,
Until they think warm days will never cease,
For summer has o’er-brimm’d their clammy cells…

Writers, especially poets, wrote about the dazzling seasonal colors of this time and the phrase “the fall of the leaves” came into more common usage. That phrase was shortened sometime in the 1600s to “fall.” This coincides with English moving across the ocean with explorers and settlers to the New World. But both words must have been used in the New World as they were in Britain because “fall” for the season doesn’t appear until 1755 when Samuel Johnson added it to his Dictionary of the English Language.

“The Falling of the Leaves” by W.B. Yeats  Autumn is over the long leaves that love us,
And over the mice in the barley sheaves;
Yellow the leaves of the rowan above us,
And yellow the wet wild-strawberry leaves.
The hour of the waning of love has beset us,
And weary and worn are our sad souls now;
Let us part, ere the season of passion forget us,
With a kiss and a tear on thy drooping brow.

Fall is still occasionally used in countries where British English is spoken, but more likely in phrases, like “spring and fall.” American though I may be, I prefer autumn, since it is used by astronomers to mark the Autumnal Equinox.